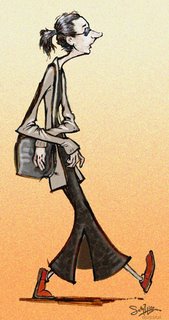 I think all color had long vanished from her except for the shoes. They refused to go along with the program. 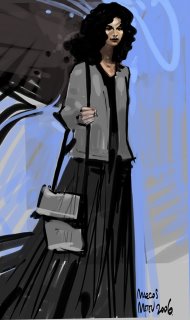 I admit by the time I realized this young lady was -the- mark of te day she had just passed already...and I missed out on a lot of detail !
So for a well documented reference please take a look at the sketch of any other of the club members !
'Soon
-Marcos.
Posted by Sketch Club at 5:52 PM 2 comments:

Well, she certainly had a look! What struck me was her pale skin, dark hair, and those redish shoes.

We had snap of cold air that would make any Californian do the unthinkable ... don a sweater. And, that is indeed what this brave woman was forced to wear when the Sketchclub executives spotted her. It must have been about 55 degrees! All right, maybe I'm exaggerating ... but it was cold! 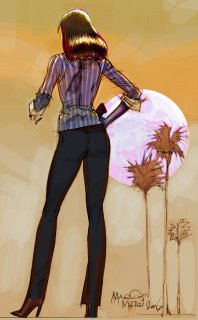 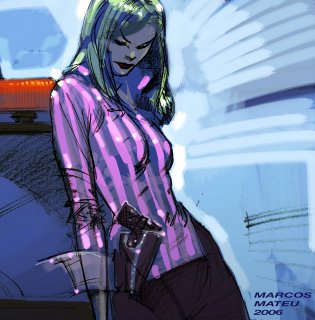 "Disperse, or you will be arrested!" 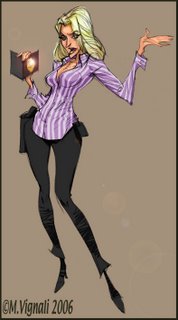 First, I would like to apologize to Seth and Noelle. Originally, we all agreed to draw a different "mark" ... but then Marcos and I went to get some coffee and our Sketchclub crew separated. It was then that Marcos and I came upon a live film set on the street.

Honestly, how could we pass up on this opportunity? Apparently, the Culver City courthouse was turned into the Hollywood Police Department for a taping of CBS's Criminal Minds. With a laser beam's precision, Marcos spotted this sexy detective. It was then we took the liberty of choosing a different "mark" other than the one we had already chosen with Noelle and Seth.

It took a few minutes of preparation, and then the director called out, "ACTION!" A couple was escorted out to their car under a swarm of photographers. The couple climbs into the car and this police woman jumps in-between the photographers and the couple and flashes her badge! She barks out orders demanding that they disperse ... or they'll be arrested. Tough talk!

Marcos and I took our mental snapshots and headed back to the office. 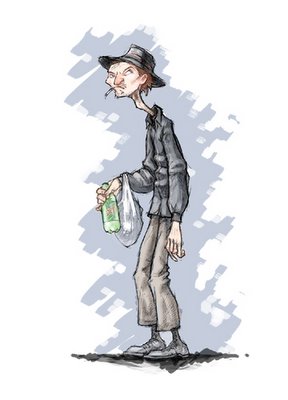 What a blast! It's not too hard to find characters 'round these parts.

When the Sketchclub executives made their mark, I tried to figure out ... why this guy? It was the hat that did it! 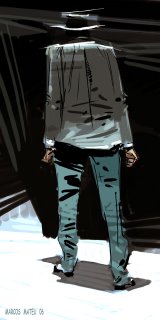 What a great day out there today !
-Marcos.
Posted by Sketch Club at 2:07 PM 2 comments: 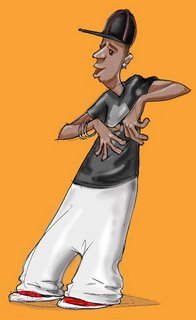 Ladies and gentlemen, I would like to introduce Seth Hippen! Seth comes to us via Utah, and is currently working at Sony's Imageworks. He's a family man, an animator ... and now has the distinction of being the latest member of Sketchclub. Check out his web site at ... http://www.roosterrhino.com/

--The Sketchclub Management
Posted by Sketch Club at 1:17 PM No comments:

IN THE DOG HOUSE 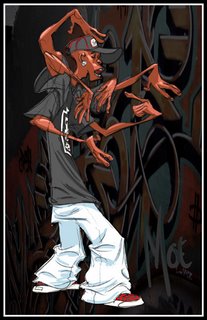 With his arms flapping like he was trying to safely flag down a plane, this poor guy was looked to be in the dog house! Two fly looking girls were paying no attention to him as he desperately tried to convince them ... of what I have no idea ... but I can only imagine. "Yo, that ain't the way it was ... that other girl don't mean nothing to me!" 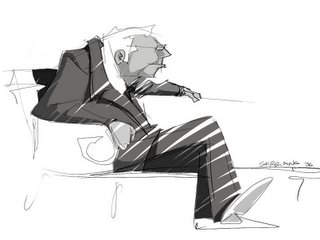 Sorry for the late drawing, but i still remember him.

--Armand
Posted by Sketch Club at 1:35 PM No comments: 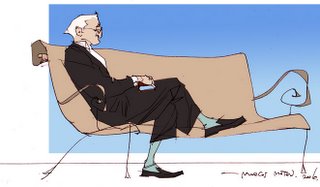 Well, it's taken me a while to put this one up.
Here's my version of the "retired" guy we saw around the other day.
-Marcos.
Posted by Sketch Club at 11:46 AM 2 comments: